Well, hasn’t it been a week for women in Australia? I hardly need to count the ways in which misogyny has reared its ugly head, but, for future reference, I will: our PM, Julia, faced a barrage of media-driven nonsense; there was the vile Liberal party dinner menu where rich men poked fun at her body; her breasts, her thighs, and her vagina. Then of course, Mr Sattler pursued a line of questioning about Julia’s partner’s sexuality. She was calm and graceful in her response; I can tell she has bigger things on her mind than the insinuations of a twerp like Sattler. I’m lucky: I don’t think I know many men of the ‘back-slapping’ variety; the men I know and love are mortified by this crap.

I saw this picture in my Facebook feed yesterday and I love it:

But how does all this pertain to the writing life? There was a lot of noise on Twitter and in the blogosphere about the Stella Prize a few weeks ago. The question raised: do we need a prize for women? I say yes, in the hope that any male reader worth their salt will pick up the shortlisted novels.  Today I discovered a whole website that encourages just this: http://guysreadgals.wordpress.com .

Women are writing some great stories, as evidenced here: 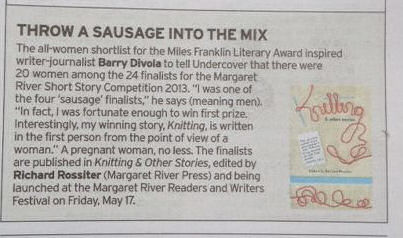 Barry Divola’s tongue in cheek ‘sausage’ comment made me smile. If you don’t know about the background, look up ‘Miles Franklin’ and ‘sausage fest’. We’re all about the faux pas here in Oz.

I’ve been thinking about George Eliot quite a bit since my post about Elemental and The Mill on the Floss. I went back and read parts of her essay, Silly Novels by Silly Lady Novelists. I laughed aloud at some of the observations; observations that would ring true today.

It made me laugh, but here’s the thing: I think that, at least in today’s social milieu, these are intellectually elitist observations. Let’s be honest, not everyone in Australia can read the highest calibre of literary fiction. Some novels would read like Chinese characters to people who merely function at a late decoding or early comprehension stage of reading. Heck, some literary fiction is incomprehensible for me and I have an English degree. What I’m saying, is that I’m glad there are silly novels out there (by silly males and silly females- actually, sales might suggest their authors are not so silly!); maybe they’re a stepping stone on the journey to better fiction. Or they just provide vacuous entertainment for a few hours. Either way, who are we to judge?

Eliot’s major concern was that certain histrionic rantings typical of a particular genre would perpetuate feminine stereotypes. I sympathize with that sentiment.  Still, I’m going to make a case for contemporary commercial fiction here, because I have a bit of ‘underdog complex’ happening. What one reads shouldn’t be a value statement, because we’re all valuable. If melodrama and frothy prose are your thing, no probs. Vampires and misogyny? Go for it. At least you’re reading. I know plenty of well-educated women who read crap and not-so-crap commercial fiction for pleasure. And some of us (ahem) are known for our histrionic rantings.

I had an interesting chat with a good friend of mine the other day. She told me that she’s not a huge fan of my writing style; in fact, she only read half of Solomon’s Baby because she wasn’t wholly engaged. She feels that my sentences are too long; they require re-reading. I love this friend, I love her candour. I admire her for her insane intellect and her unwavering honesty. We’ve developed a sister-like relationship so we’re honest about our feelings, even when it hurts. Of course, feedback like this always stings a little bit; I’d be a liar if I said it didn’t.  But I’d also be stupid if I thought everyone should like my style. Goodness, I’m a writer; rejection comes with the territory!

What was most interesting about our conversation was that old chestnut, ‘What’s the difference between commercial and literary fiction?’
Is commercial fiction vacuous and populist? Most of the time, not always.  Does it sell better? Yes. Is serious fiction more obscure? Does it require more of the reader? Yes, I think so. Is serious fiction as entertaining, as pleasurable, as a light romp? Yes, indeed: it’s like the Kama Sutra for ten days straight when good literary fiction hits the mark.

It’s such a subjective thing though, isn’t it? The gatekeepers of the literary world, the publishers, the critics, seem to decide. In saying that, for me, serious fiction is about brilliant prose, complex characters, imagined worlds that I can sense in a visceral way. Most of the time, as I read literary work, I wonder if the author is a bit of a genius. I felt that way when I read Elemental. I feel that way at the moment, as I read The Last Sky by Alice Nelson (I believe she was in her early twenties when she wrote it??!! Genius.). Nelson and Curtin’s work is the real deal. Reading this kind of writing is part of my apprenticeship and the experience of good fiction can be transcendental; goosebumps, heightened senses, an ache in my throat, tears all a-prickle. That doesn’t mean to say that there is no place for commercial fiction in my life. I read the Twilight series in two days; NOT transcendental, but it definitely served a purpose at that particular time: escapism and relaxation (except for when I bristled at awkward turns of phrase or creepy gender interplay!).

You see, when asked to pigeonhole my work, I’ve been hesitant to call it literary fiction or serious fiction, because I’m full of doubt, and, like most writers I know, quite self-deprecating when it comes to my work. I’m just not sure that it’s good enough to be called literary fiction. Actually, right now, I know it isn’t of Curtin’s or Nelson’s calibre. I met an insightful woman in Margaret River who suggested that my work might be ‘commercial fiction with integrity’. I’m intending to purloin that phrase forevermore. At least until the doubt disappears…yeah, probably never.